Learning- the final documentation challenge? These are the blogposts of the PSAM Regional Learning Programme Learning Pilot Technical Team....

The Eternal Challenge of the External Consultant

Every time a new project begins, some recurrent feelings and uncertainties burst into every external consultant’s mind. Logistics, finding the right approach, time allocation, bonding with a new team, being a better researcher project after project…

But there is an additional challenge that I am confronted with, time and time again, as an external critical friend: I do not want to be like or appear to be like ‘Chapulin Colorado’.

If you didn’t grow up in Latin America like me, you are probably wondering who the Chapulin is. The “Chapulin Colorado” is a beloved red grasshopper from Mexican TV, played by the very famous actor Chespirito. This character is a clumsy but well meaning anti hero – a parody version of traditional superheroes. He can detect problems from far away and appears out of thin air when someone in distress cries out loud: ‘Oh! Who will defend us now…?’

The people who summon him initially think this man in a grasshopper suit has magical superpowers. They trust him to solve their problems. As he addresses the problem, Chapulin often gets some things right. He even tends to brag about his smarts and tiny successes, aided by his classic catchphrase: “You didn’t think I had it in me, did you?” Nevertheless, Chapulin never finds a one shot solution. He inevitably stumbles with more obstacles than he initially is able to foresee, but he keeps trying. After all, his heart is in the right place. It is sometimes silly how this well intentioned underdog continues to fight it out. 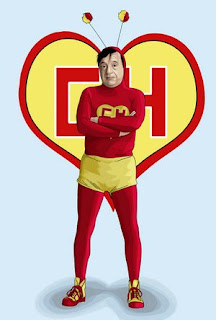 Time and time again, as a critical friend, I find myself thinking: ‘I am not a red grasshopper; I am not Chapulin’. I share the good intentions, but hope to be better tuned to my contexts and the challenges ahead so that I don’t stumble against so many obstacles that look like obvious for anyone else observing Chapulin (or me). As I try to think how to support colleagues in Bulawayo, I suspect that although they may not be familiar with this Mexican TV character, they most probably have dealt with similar real life versions of this character – minus the comedic effects – before. External, critical friends that do not perceive the obvious challenges and obstacles ahead in the quest to find a solution to difficult learning challenges.

So, how to avoid becoming the parody of the parachuting foreign consultant that I suspect is going through people’s minds when they first see us? How do we build trust – a bridge between the external view we might be able to bring, and the internal points of view, for the sake of the project? How does one take advantage of this regional learning opportunity, if not by gaining the Bulawayo people’s trust and open the way to a mutually enriching work path? The ever present struggle of an external consultant: here to support learning and learn herself by doing with others. Hard contextualized work, informed by cross-national perspectives; no magic.

Read this post on COPSAM
Posted by Learning Blog Administrator at 1:25 AM